"I Disliked All Sports At School"

In our next athlete article Fujio Miyachi tells us how he went from being a child who hated all sports to embracing mountain running!

This is the starting point of my career as an athlete. This story is well known to my friends from primary school. To begin with, I was not very good at exercise, and on days when I had a PE session in the school, I would get headaches and stomach aches for no reason.

But there was a turning point in my life when I came to love exercise. My first turning point came in my third year of junior high school. Every year in the Fall, my school organized a 20k race. For the first two years after I started to take part in it, I was at the back of the pack of all three grade’s students.   But I wanted to change the fact that I was no good at any sports by the end of the junior high school days. So, in my last year of junior high school, I decided to run a little bit every day for a month before the race. Thanks to this training, fortunately, I was able to finish in the middle of the pack (I definitely don’t remember ranking). This experience made me realize that even if I am no good at something, I can improve by working at it.

Then I had another turning point, Ontake Sky Race in 2006. 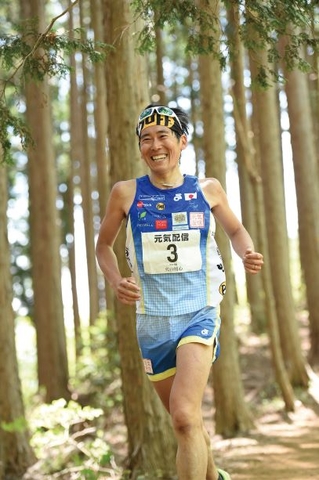 As it was a part of SkyRunning World Series, there were 20 international runners from Europe and the United States among the 200 runners in the field. I was overwhelmed by their performance. It was at this race that I became fascinated with mountain endurance sports and realized that the only way to compete with international runners was to go out and compete in global races. Since then, I have taken part in various trail running races around the world.

Of course, I am always trying as hard as I can but I started running in the mountains at the age of 27, which is definitely late. So, I feel inferior to other runners who started running at an earlier age. I started to take sports seriously after I had grown up to a certain extent, and so I lacked important capacity as a professional athlete. Firslyt, I didn’t have athletic experience as a base. This lack of experience has led to a lack of adaptability. Also, I lacked the ability that can be honed by working on various types of training from a young age. After all, I didn't start sports seriously until I was in my twenties. I don’t have great reflexes, but I've managed to do mountain running to a reasonably good level because I realize that I don’t have abilities that other runners have. I don't have many options to begin with. I'm lucky to have found mountain running that I can get into and I have a chance to win.

If we want to leave a rich future for our children, we should give them many experiences from a young age, not just sport. It`s good for them to go to various places and interact with many people. In any case, I believe that having a variety of experiences will become an asset and lead to better choices later on. In this sense, mountain running is a great experience because we can enjoy nature and sport at the same time.

Looking back on my own experiences, I want to maximise the possibilities for children by experiencing sport from an early age. In addition, I would like to tell them the following tips:

I didn’t like exercise when I was young, but I had the chance to compete with international runners when I encountered “running”. So, I am more passionate than anyone else about teaching children the importance of exercising at an early age, and I want to actively pass on the know-how and ideas I have gained to them. With this in mind, I have been organizing an annual event called the "Junior Trail Running Series" in Japan, as well as training sessions for junior runners to foster the next generation and spread awareness. I would like to introduce the details of this program in the next article, but it has been going for more than 10 years and has attracted more than 10,000 participants.

As a side note, since last year, it has been difficult to hold these races in Japan due to the COVID19 pandemic. Of course, we had to observe the infection status, but nevertheless, we have been able to organize races relatively consistently from last year to this year because of the various measures we have taken, the trust we have built with the local communities, and the fact that the races are divided by age group, which makes it easier to control the number of participants.