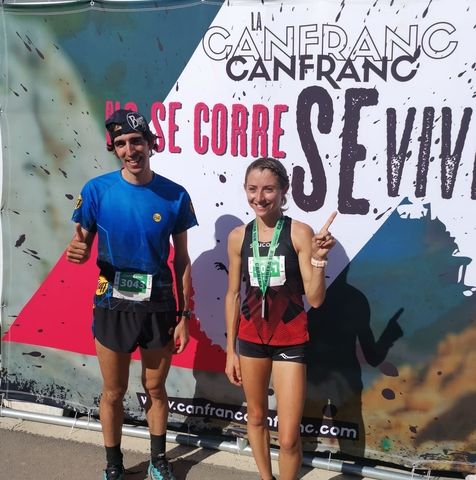 After an exciting day of racing at the Canfranc 45k race, our 9th round of the World Cup, yesterday, we didn’t have long to wait for round 10. Canfranc provided the stunning backdrop again for the 16k classic mountain race today.

We were looking forward to seeing 2019 world champion Grayson Murphy (USA) back for more European action, after her win at Trofeo Nasego (and 2nd place at Vertical Nasego) last weekend. Also on the start line for the women were course record holder Servant Nadege (FRA), Nuria Gil (ESP) and Yolanda Martín (ESP). In the men’s race all eyes were on 2020 winner Antonio Martinez (ESP), who would face strong competition from Sandor Szabo (HUN), and Spanish athletes Iñigo Arantzamendi, Roger Comellas, and Ion Sola. Also on the start line for the men was Raul Criado, who was 3rd in yesterday’s 45k race, back for more!

The runners were set off in small groups at minute intervals, in line with local Covid protocols. They would face one up and down over the 16k, but what a big up and down it was! 1400m over the course of the first 6k to the summit of La Moleta, followed by a technical 10k descent down to the finish.

It was Szabo who hit the summit in the lead in the men’s race, with Daniel Castillo (SPA) a minute behind and Martinez a minute behind him. It was all still very close, despite the long climb. In the women’s race there was a clear leader and that was Murphy. She hit La Moleta 10 minutes ahead of Gil and in fact was lying in 4th place in the race overall at that point! Servant was around 90 seconds behind Gil. It looked unlikely that Murphy would be caught, but anything can happen on a 10k technical descent! In the men’s race it was Martinez who hit the final stretch (part of the famous Camino del Santiago) first and he took the win, his second consecutive one here, in 1.52.26. Szabo was a minute and a half behind in 2nd place in 1.53.52, with Castillo taking 3rd in 1.54.38. All eyes were on the clock for Murphy’s arrival as it looked likely that the existing women’s course record of 2.08.18 was under threat. In fact Murphy broke the tape in an incredible 1.57.43, obliterating the previous mark and finishing 5th overall! The runner who set that record, Gil, took 2nd in 2.15.28 and Servant was 3rd in 2.17.16.