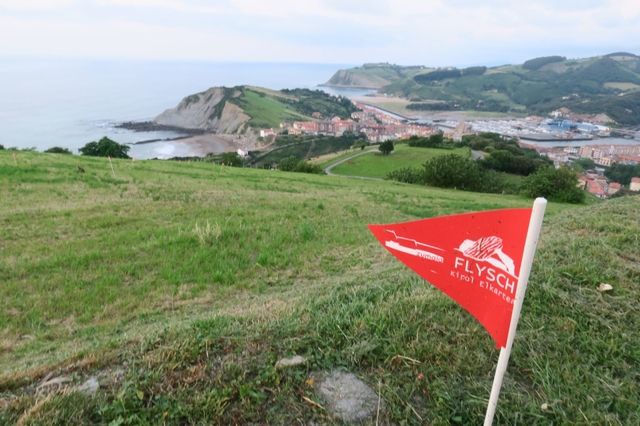 2021 has been a year of firsts for the World Cup. Not only did it visit Poland for the first time – twice, at Tatra Race Run and Tatra Skymarathon – but it also ventured into Spain for the first time. After a hugely successful Canfranc-Canfranc in mid-September we’re heading back to Spain for Zumaia-Flysch this weekend (3rd October).

Zumaia-Flysch takes place in Gipuzkoa Province in the Basque Country in Northern Spain, near San Sebastian. This area is a UNESCO Global Geopark, so it’s important from a natural and cultural perspective. It’s an incredibly beautiful area sandwiched between the mountains and the sea.

As you’d expect for an area of natural heritage, the organisers of this race take their commitment to sustainability very seriously. This year they are trying to secure Europarc Certification for Care for the Environment and they are impressing upon runners the importance of leaving no trace, respecting the paths and using public transport where possible, among many other initiatives. The marathon distance race should provide a tough final test for the runners who favour the long courses. While it tops out at a modest 613m, the constant ups and downs over the route add up to a huge total of 2916m of elevation.

Charlotte Morgan (GBR), currently lying 2nd in the World Cup rankings, just 5 points behind Joyce Njeru (KEN), will be on the start line of the long race. With a decisive win at Canfranc-Canfranc a few weeks ago and a win at Tatra Race Run at the start of the World Cup, Morgan must be a favourite here. But she will face tough competition from Oihana Kortazar (ESP) who will also be hotly tipped having won Canfranc-Canfranc marathon in 2020 and finished 3rd in Olla de Nuria and the Spanish Mountain Running Championships this year.

Raul Criado (ESP) will go in the men’s race. Just a few weeks ago he doubled up at Canfranc-Canfranc, coming 6th in the short race and 3rd in the marathon race. He also finished 3rd at Tatra Race Run and he’s current lying 5th in the World Cup standings. But he will face a tough field of Basque athletes and strong international runners. The 22k classic mountain race looks like it will be a fast affair. It has 850m of ascent in total but the highest point is just 210m and it hugs the stunning coastline, so the shorter, runnable ascents may suit the runners with more speed. And there will certainly be a lot of faster runners on the start line.

For the women we’ll be seeing Joyce Njeru (KEN), our current World Cup leader, straight from her win at Trofeo Ciolo last weekend. Njeru is having an incredible year, having also won at Grossglockner and Krkonossky as well. We may also see a repeat of last weekend’s Trofeo Ciolo, where Njeru and Lucy Murigi (KEN) battled right to the end for victory as Murigi, currently 4th in our World Cup standings, will also be on the start line. With a win at La Montee du Nid d’Aigle and a 3rd place at Grossglockner Murigi is bound to be in contention. Other athletes expected to feature include Alice Gaggi (ITA), fresh from a 3rd place at Trofeo Ciolo and a string of solid results leading to a 3rd place ranking in the World Cup at the moment, Nadege Servant (FRA), who finished 3rd at Canfranc-Canfranc, and Kitti Posztos (HUN).

Live streaming available at youtube.com/moxigeno from 7.15am on Sunday October 3