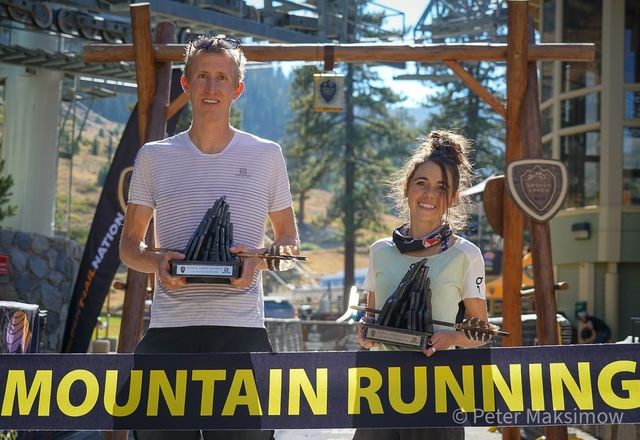 The first race to kick off the Broken Arrow Skyrace presented by Salomon was the VK held on Friday, October 1. The event was one of two American-based races in the 2021 WMRA World Cup, the other being the 26K Skyrace to be held Sunday, October 3, with both events staged in Olympic Valley, CA, site of the newly renamed resort of Palisades Tahoe.

What better way to start the weekend than with an all-out, vomit-inducing, ladder-climbing, red-lining-4.25-mile slog from a 6,234-feet to 8,855-foot-high peak. At 11:00 a.m. nearly 200 runners lined up for the start. Skies were powder blue with temperatures in the 50s, but it felt much warmer due to the vibrant autumn sunshine.

Darren Thomas, 27, and Allie McLaughlin, 30, both of Colorado Springs, CO, took the VK titles and the World Cup crowns.

Thomas and fellow Coloradoan, Andy Wacker, 33, Boulder, took the race out with decisive speed, however, Thomas took control and slowly increased his lead to In the women’s race, McLaughlin closely trailed the lead women until the one kilometer mark, when she accelerated and took charge. She continued to gap the field to break the tape in a time of 54:24 to finish in 14th position overall. Less than one minute later, Hillary Allen, 33, Fort Collins, CO, finished second followed by 19-year-old Grace Staberg, Silverthorne, CO.

Due to COVID-19 restrictions, international travel was a huge challenge, however, Ondrej Fedfar, 32, placed an impressive fourth overall after just arriving from the Czech Republic. Other international finishers included Ryan Atkins, 34, Canada, who finished eighth, Juan Bolaños, 20,  El Salvador, 20th among the men, and Anna Frost, 39, New Zealand who finished ninth among the women. Words and photos by Peter Maksimow