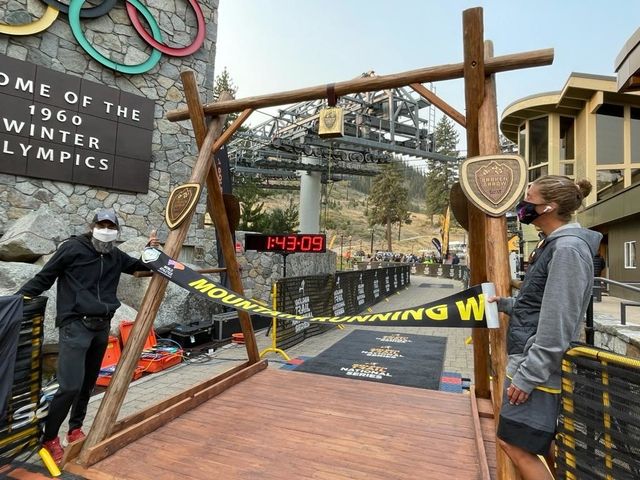 Sunday, October 3, was the final day of the three-day Broken Arrow Skyrunning festival (https://www.brokenarrowskyrace.com/) held at Palisades Tahoe resort in Olympic Valley, CA. The festival culminated in a 23K which was shortened from its original 26K distance due to construction at the resort. Like the VK on Friday (https://trailrunner.com/trail-news/mclaughlin-and-thomas-victorious-at-broken-arrow-skyrace-vertical-kilometer/), two Coloradoans were victorious in Joseph Gray, 37, Colorado Springs, and Janelle Lincks, 28, Thornton.

The race started at 7 a.m. at the Palisades Tahoe epicenter running through the resort’s brick-lined promenade before switchbacking up the single track trails and circumnavigating the resort, climbing from 6,214 feet to a high point of 8,855 feet and then returning to the finish for a total of 5,030 feet of vertical gain. “It was a respectful pace at the start,” said eventual winner Gray, “we stayed bunched up for the first few miles with a deep field of talent. My goal was to progressively pick up the pace and let the pack guide my moves. “It was great to feel the energy coming into the finish area and ring the bell,” said Gray. “A win was the main goal and obviously I’m content coming away with that.” On the women’s side, Lincks started out conservatively through the village and after the first climb had moved into the lead, a position she kept to the finish. Her winning time of 2:14:04 bested second-place finisher Emkay Sullivan, 27, Reno, NV, by more than three minutes. Sullivan’s time was 2:17:19. In third, Bailey Kowalczyk, 26, Boulder, CO, was timed in 2:19:43.

Very happy with her effort, Lincks said shortly after her finish, “It was a beautiful course and I felt good...I’ve never seen landscape like that!”

In addition to a $3,500 pay day, Gray and Lincks captured the WMRA World Cup points as well as the win for the final race in the Golden Trail National Series presented by Salomon (https://www.goldentrailseries.com/series/usa-can/). Thomas and Sullivan each earned $2000, while Wacker and Kowalczk each netted $1000.