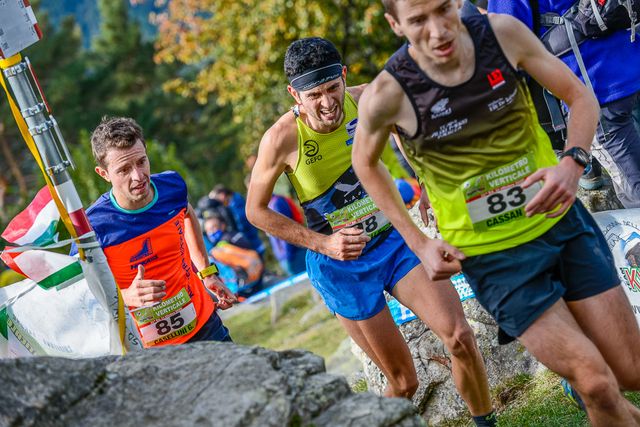 For our final World Cup race of 2021 we head to the north of Italy for Chiavenna-Lagunc. On Sunday runners will take part in this famous short uphill race, starting in the historic old town of Chiavenna and finishing in Lagunc.

Chiavenna Lagunc is a very fitting race to act as a grand finale for this year’s World Cup.  It would be hard to find a town that’s as steeped in mountain running history and tradition. The track which winds up from Chiavenna at 352 metres to Lagunc at 1352 metres was actually the world’s first official, certified vertical kilometre.

We’re asking all our races this year about what they’re doing to promote sustainability. Chiavenna Lagunc is quite unique in this regard as it’s part of the ‘orange flags’ initiative, which recognises its sensitivity to sustainability. The ‘orange flag’ status is awarded to towns which preserve their historical areas and also make their architectural, artistic and naturalistic resources accessible to and usable by the people. Essentially it celebrates uniqueness and preservation.

As well as the short uphill race there’s also a series of trail races in the area and one of these, Val Bregaglia Trail, will serve as the venue for this year’s Nations Cup on October 31st.

Going into this final (of 3) short uphill race of this year’s World Cup it’s Allie McLaughlin and Andrea Mayr who lead the women in this race category, both with In the women’s race we will see all of the top 5 runners in the World Cup rankings. These are (in order) Joyce Njeru (KEN), Charlotte Morgan (GBR), Alice Gaggi (ITA), Lucy Murigi (KEN) and Timea Merenyi (HUN). But we will also see Andrea Mayr (AUT), who seems in unbeatable form this year, Francesca and Erica Ghelfi (ITA), Charlotte Cotton (BEL), Mojca Koligar (SLO), Camilla Magliano (ITA) and Kitti Posztos (HUN). In the men’s race we will also see the full top 5 on World Cup points: Sandor Szabo (HUN), Henri Aymonod (ITA), Geoffrey Ndungu (KEN), Raul Criado (ESP) and Petro Mamu (ERI). We will also see Timotej Becan (SLO) and Alberto Vender (ITA), among many others including great runners from this local area.

So it looks like it’s going to be a fantastic race, with many of the top short uphill mountain racers in the world taking part, and a very exciting finale to the World Cup, deciding who will be crowned overall champions. Remember that there are still rules and bonuses to be applied to the athletes’ scores (additional points are available for runners taking part in Chiavenna-Lagunc, for those taking part in 5 or 8 races, and for those taking part in at least 1 race in each category). Final winners will be announced as soon as possible after Chiavenna-Lagunc.

Find all the current World Cup rankings, and information about the rules regarding final scores here: https://www.wmra.info/files/world_cup/2021_WORLD_CUP/Wcup_Positions/WCUP_15from16c.pdf