Victory for Ghelfi and Abraham at the Nations Cup 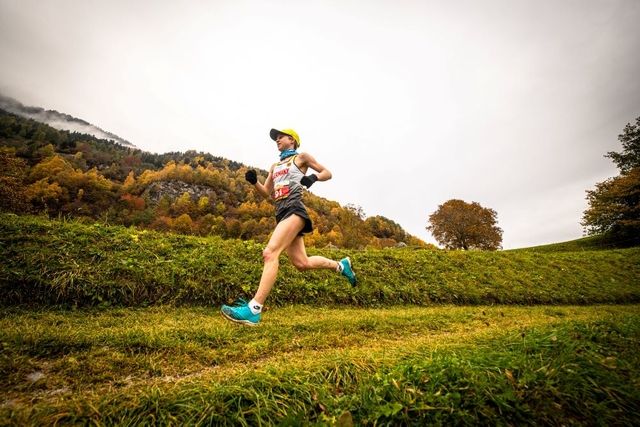 When the World Mountain Running Championships in Thailand was postponed to February 2022 the WMRA were keen to make an international competition happen at the end of the 2021 season. The seed of an idea for the Nations Cup was planted!

In his comments at the opening ceremony WMRA President Jonathan Wyatt thanked the organisers of Val Bregaglia Trail for staging this special edition of the race and for pulling the whole thing together in just over 6 weeks. Just as importantly he also thanked the athletes for their commitment to training and qualifying for the competition and for travelling to Chiavenna. Together they all made it happen.

So we’d waited a long time for another international competition to come around and expectations were very high. Could the Nations Cup live up to them? 100 athletes from 15 countries stood on the start line, eager to compete at the highest level on this fast 19k course with 660m of ascent.

In the women’s race it was Scotland’s Scout Adkin and England’s Kate Maltby who struck out at the front. At the 4.5k point Scout was narrowly ahead and they were being chased by Italian Francesca Ghelfi, who was around 40 seconds behind. Similarly, in the men’s race two athletes tried to stamp their authority on it from the start and it was Lengel Lolkurraru of Kenya and Filimon Abraham of Germany. At this point they were neck-and-neck, with Czech athlete Jachim Kovar 40 seconds back. At the 10k point little had changed at the front. Adkin and Maltby were together and Italian Alice Gaggi had caught up to Ghelfi, 30 seconds behind the leading pair. The chase was definitely on. Lolkurraru and Abraham remained at the front of the men’s race, with Kovar still leading the chase but by this point Timotej Becan of Slovenia and Chris Richards of England were also pushing hard for the podium.

It was the next time check at 15.8k where things had started to change. It was now Ghelfi who was leading the women’s race and she had started to stretch out a gap of 45 seconds over Adkin. Maltby was still in touch with Adkin, just 10 seconds behind her, and Gaggi was also still in contention for the podium just 12 seconds behind Maltby. In the men’s race Lolkurraru was leading by a very narrow margin of 5 seconds from Abraham and it was Becan who lay in third, a minute and a half back. All nail biting stuff! So who would we see arriving in the town square in Chiavenna first? It was Abraham who was first to arrive, having stretched out a lead of just over a minute from Lolkurraru in the final 5k. He won in 1.18.29, Lolkurraru took the silver in 1.19.48 and Becan bronze in 1.22.10. Becan beat fourth placed Daniel Pattis by just one second in a sprint finish! Richards was 35 seconds behind for fifth place. In the women’s race Ghelfi hung on to take the gold for Italy in 1.34.01. Adkin took the silver in 1.35.14, with a great breakthrough performance, and it was Hanna Grober of Germany who came through for the bronze in 1.35.51. Gaggi was just 5 seconds behind in fourth and Maltby claimed fifth in 1.36.59. In the team competition it was a win for England’s women, with Italy second and the Czech Republic third. Italy’s men took the gold, with England second and Romania third.

A quote from Jonathan Wyatt: “It is with great pleasure that the WMRA are able to put together an event in the space of only 6 weeks where athletes could compete for their country and our WMRA and World Athletics members can join after 2 years without a World Championships for our senior athletes.  The races have been hard and the competition exciting and it is a pleasure to hear again the National anthems of the winning teams and individuals once again for a senior mountain running competition.  The WMRA would like to thank the services of the town of Chiavenna and their superb organisation team as well as the support we have received from the Italian Athletics federation (FIDAL).”